Speaker’s Profile:
Koko Kondo was born in Hiroshima as the daughter of a Methodist minister and at 8 months old became exposed to radiation from the atomic bomb at 1.1km from the hypocenter. As an atomic bomb survivor, Kondo experienced many hardships, undergoing numerous medical examinations for others to study the effects of radiation on the human body. At age 10, Kondo had a transformative experience meeting the co-pilot of Enola Gay the B29 plane that dropped the atomic bomb in Hiroshima. After graduating from Oberlin High School in Tokyo, Kondo attended Centenary College in the U.S. and later graduated from American University. Carrying the torch of her father Kiyoshi Tanimoto’s commitment towards peace and telling the world about Hiroshima and nuclear power, Kondo continues to travel around the world to send her message. Her publication includes “Hiroshima?60 Years of Reflection” (2009) Tokuma-shoten.

Abstract:
I was 10 years old when the civil war broke out in Cambodia in 1975. Up to that point, I was part of a happy, ordinary family growing up receiving a great deal of love from my kind parents. But my life in Cambodia changed overnight with the advent of the civil war. Looking back, it was like the world suddenly turned upside down. In Japan, whenever there is a change in government leadership, it never leads to any drastic change for its citizens. However, in Cambodia, change in leadership meant a “life or death” issue for its people.
The period of the civil war, to be precise, was from April 17, 1975 to January 7, 1979, lasting 3 years, 8 months, and 20 days. During that time, as a young child, I experienced forced relocation, forced labor, and lost my beloved parents and four siblings. After surviving miraculously, I was able to move to Japan in 1980, with my two surviving elder brothers to live with my older sister who was studying abroad in Japan, by risking our lives escaping through minefields. So many people provided support and helped so kindly before and after this ordeal, and although my 30 years in Japan cannot be described as bright and rosy, I was able to regain a sense of normalcy in my life.
It was in 2005 that I experienced a turning point in my life. It had been exactly 25 years since I arrived in Japan, and during that year, I was able to return to my homeland, and hold a memorial service for my parents and siblings as well as many other victims whose names are not known. Many local people took part in this memorial service but many of them were, in fact, the past perpetrators themselves. At first, I felt tremendous fear, however, on the day of the service, I witnessed all of them having transformed into elders with very soft, gentle expressions. After watching their serious expressions as they tried to appease the spirits, I experienced a major transformation in my heart. I had the epiphany that humans can become angels or devils according to the period of the times. Basically, in times of war, ordinary people can turn into the devil, but once war ends and time passes, they can go back into becoming good, ordinary people.
After witnessing their transformation, I was able to create space in my heart to accept my extremely tragic and difficult past. Because of this, I gradually felt it was important for me to use my experience of the utter foolishness of war to contribute in my own way to world peace. In order to honor the noble sacrifices made by many people including my family, I want to continue to communicate the importance and beauty of a peaceful world.

Speaker’s Profile:
Survivor of the Cambodian Holocaust by Khmer Rouge. Ponnareth Kugo was born in 1964 in Phnom Penh.
She lost four siblings during the holocaust. After escaping to Khao-I-Dang Holding Center in Thailand, she came to Japan.
She held memorial services at Killing Field together with the wrongdoers at that time in 2005. Author of the book “Rainbow Sky” (2009) Shunju-sha.

“Depleted uranium ammunition was first used on the battlefield during the 1991 Gulf War.
Depleted uranium is one of the main radioactive waste products of the nuclear industry. After the Gulf War, the world paid no heed to the sudden increase in Iraqi children who developed leukemia and cancers. This documentary considers the use of depleted uranium ammunition to be a turning point as significant as the nuclear bombing of Hiroshima and Nagasaki. This movie carefully conveys the voices of the Iraqi, American and Japanese radiation victims. It shows how their health, life and livelihood were damaged, not by their participation in a war, but by exposure that came unnoticed, in the course of their daily lives. The same is happening to each one of us. It is already an established fact that waging wars is no longer a realistic proposition – but what will mankind’s choice be ?
We would like to gently ask everyone who sees this film what lies in their future.”By Hitomi Kamanaka, Director.
Trailer, “Hibakusha: At the End of the World” 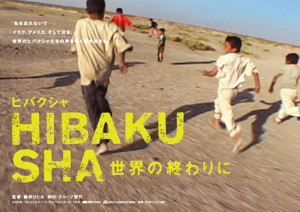