If you have any thoughts and comments on the conference, please send your email to the following address.
Conference Committee E-mail: sietarjapanconference2020@gmail.com

The positions below are opening at the end of March 2021.

Caution:
Any member of at least three years of membership may nominate oneself or another member for the position. The nominee with less than three years of membership will need to be recommended by a steering committee member. The Internal Relations Director shall contact the nominees after consultation with the President and Vice President, and receive the nominees’ consent to be on the ballot.

Thank you for your attention! 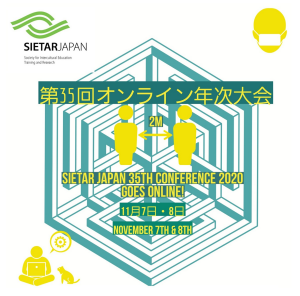 Statement in Solidarity with Anti-Racism Protests

Over the past several weeks, the world has expressed outrage over the killing of George Floyd and countless unarmed others who have died at the hands of police. Floyd’s death has sparked a wave of mass anti-racism demonstrations in the U.S. and around the world, calling for justice and reform. We at SIETAR Japan are deeply moved and energized by the unity of thousands of people, and stand in solidarity with this movement in the fight against racism and injustice in Japan and around the world.

As global citizens, we recognize that the issues surrounding interpersonal, institutional, and cultural oppression are deeply interconnected and are relevant to anyone regardless of where we live. As much as the focus is on the injustices overseas, we believe we need to also look inward and to reflect on these issues as individuals and as a society in the Japanese context. Japanese society has not always been welcoming to those who are considered “different,” despite our priding ourselves as “good” and “decent” people. We have often remained complicit in the face of violations of human rights and have not done enough to raise our voices.

SIETAR Japan has long been doing the work of promoting diversity and inclusion, but we recognize that we must do more, and to acknowledge that anti-racist work is ongoing. We as a group must continue to work to provide the necessary research, theories, and educational tools that allow us to not only recognize injustice but also to raise our voices and to take action. We will continue to work towards a more just and equitable world for our communities to create a multicultural, inclusive society.

It has come to our attention that since this is the first time to hold an online conference, potential presenters need extra time to submit proposals.

Therefore, the SIETAR Japan Call for Proposals has been extended to Friday midnight, August 7, 2020.